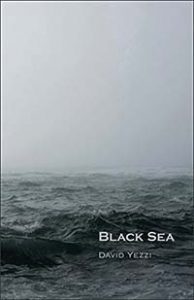 David Yezzi’s fourth book of poems considers what it’s like, during times of roiling change, to feel like a stranger on one’s own street and in one’s own country. This uprooting is partly geographic, partly psychic: what was familiar has become as foreign as the fabled Black Sea (the site of the Roman poet Ovid’s exile). The emotional pressure of this dislocation pushes his poems into lyric fragments and mordant humor. Home, once a comfort, now hides a threat.