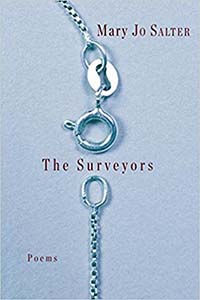 “I’m still alive and now I’m in Bratislava,” says the speaker of one of Salter’s poems, as she travels with her unlikely late-in-life love, a military man. She never expected to be here, to know someone like him, to be parted from her previous life; how did it happen? Time is hurtling, but these poems try to slow it down to examine its curious by-products–the prints of Dürer, an Afghan carpet, photographs of people we’ve lost. The title poem, a crown of sonnets, takes up key moments in the poet’s past, the quirky advent of poetic inspiration, and the seemingly sci-fi future of the universe. Throughout, in a tone of ironic wonderment, placing rich new love poems alongside some inevitable poems of leavetaking, Salter invites the reader to weigh and ponder the way things have turned out–for herself, for all of us–in this new century, and perhaps to conclude, as she does, “That’s funny . . . “