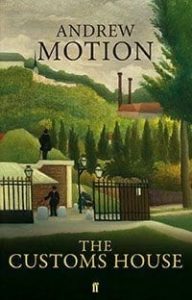 Andrew Motion’s new book opens with a sequence of war poems (first published as the pamphlet Laurels and Donkeys, on Armistice Day 2010), drawing on soldiers’ experiences of war from 1914 until today – beginning with a story about Siegfried Sassoon and moving via World War Two and Korea to the recent conflicts in Iraq and Afghanistan. Many of the poems are in the voices of combatants, others are based on memories of the poet’s father, who landed at D-day and fought in France and Germany. The poems combine understatement with a clear-eyed and unswerving candour.

The Customs House has other rooms: a group of topographies, mapping moments in a marriage against the contingencies of place and family history; and several ‘found poems’, in which the poet collaborates with his source, mixing what is there already with what is about to be there: whether a remarkable sonnet sequence on the last days of the Baroque genius Francesco Borromini, or in other poems a richly imagined extrapolation from the silent premises of a painting.