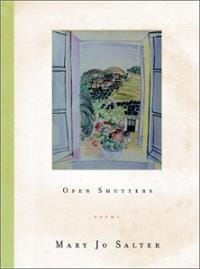 Mary Jo Salter’s sparkling new collection, Open Shutters, leads us into a world where things are often not what they seem. In the first poem, “Trompe l’Oeil,” the shadow-casting shutters on Genoese houses are made of paint only, an “open lie.” And yet “Who needs to be correct / more often than once a day? / Who needs real shadow more than play?”

Open Shutters also calls to mind the lens of a camera—in the villanelle “School Pictures” or in the stirring sequence “In the Guesthouse,” which, inspired by photographs of a family across three generations, offers at once a social history of America and a love story.

Darkness and light interact throughout the book—in poems about September 11; about a dog named Shadow; about a blind centenarian who still pretends to read the paper; about a woman shaken by the death of her therapist. A section of light verse highlights the wit and grace that have long distinguished Salter’s most serious work.

Fittingly, the volume fools the eye once more by closing with “An Open Book,” in which a Muslim family praying at a funeral seek consolation in the pages formed by their upturned palms.

Open Shutters is the achievement of a remarkable poet, whose concerns and stylistic range continue to grow, encompassing ever larger themes, becoming ever more open.