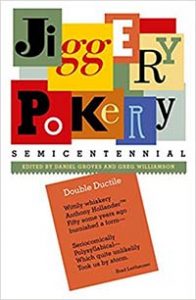 Poetry. It is 50 years since Atheneum published Anthony Hecht and John Hollander’s Jiggery-Pokery, a compendium of verses known as double dactyls. The double dactyl was the invention of Hecht and Paul Pascal, and is was aptly described on the jacket of Jiggery-Pokery as a devilish amalgam of rhyme, meter, name-dropping and pure nonsense. It caught on, too, just as the limerick and the clerihew had caught on, and has been testing the mettle of many a poet–and not a few aspiring poets–ever since. To celebrate Jiggery-Pokery`s half-century, Waywiser is delighted to be publishing JIGGERY-POKERY SEMICENTENNIAL, a wholly new compendium expertly edited by Dan Groves and Greg Williamson. The volume is dedicated to the memories of Hecht and Hollander, and it comes with a splendid introduction by Willard Spiegelman, Hughes Professor emeritus at Southern Methodist University in Dallas, and a regular contributor to the Leisure & Arts pages of The Wall Street Journal. Spiegelman’s most recent books are Senior Moments: Looking Back, Looking Ahead (2016) and If You See Something, Say Something: A Writer Looks at Art (2016). The volume also comes complete with a cover by the celebrated graphic designer Milton Glaser, a singularly appropriate choice since Glaser (still going strong at the age of 88) designed the cover for and also illustrated the original Hecht-Hollander volume.