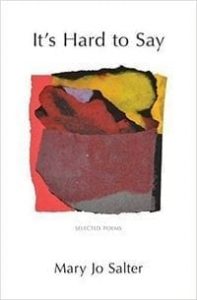 “Only a few poets transcend the history of taste to participate in the history of art – and only in a handful of poems. Salter has been struck by lightning more than once.” So wrote the critic James Longenbach, and in It’s Hard to Say, which is Salter’s first UK Selected, one can see the proof of Longenbach’s statement. It’s Hard to Say gathers poems from each of Salter’s seven previous collections – Henry Purcell in Japan, Unfinished Painting, Sunday Skaters, A Kiss in Space, Open Shutters, A Phone Call to the Future, and Nothing by Design – and the accomplishment of this fine poet is on display at every point, in poems that are unfailingly well-made, and which move from the touching to the angry, from the humorous to the entirely serious, from the domestic to the universal.