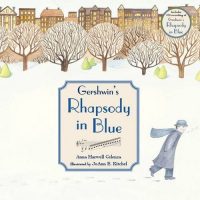 George Gershwin only has a few weeks to compose a concerto. His piece is supposed to exemplify American music and premiere at a concert entitled “An Experiment in Modern Music.” Homesick for New York while rehearsing for a musical in Boston, he soon realizes that American music is much like its people, a great melting pot of sounds, rhythms, and harmonies. JoAnn Kitchel’s illustrations capture the 1920s in all their art deco majesty.