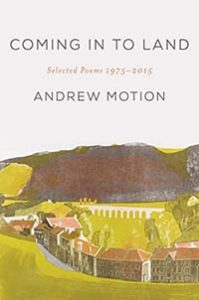 From England’s former Poet Laureate, a collection of selected poetry spanning his celebrated career, presented for the first time by an American publisher

Andrew Motion has said, “I want my writing to be as clear as water. I want readers to see all the way through its surfaces into the swamp.” Though the territory of his exploration may be murky and mired—the front lines of war, political entanglements, romantic longing, and human suffering—Motion’s conversational tone and lyrical style make for clear, bold poems that speak to contradictions at the heart of the human condition.

Whether underground in an urban metro, in the poet’s home, on the steps leading up to Anne Frank’s annex, or wading in the Norfolk broads, Motion’s richly imagined landscapes contain unspoken mysteries underneath the poet’s candor. In the tradition of English pastoral poetry that includes Ted Hughes, Seamus Heaney, and William Wordsworth, these poems skate over sweeping empires and plumb emotional depths, settling in a meditative, understated register. As an introduction to one of England’s most lauded living poets, English Elegies offers a moving depiction of this writer’s career as a chronicler of modernity’s pitfalls and triumphs.