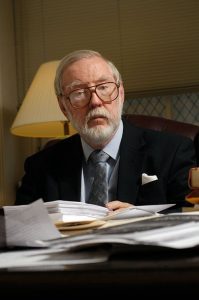 Born in Houston, Texas on 24 April, 1940, he was the son of William and Marguerite (Hunsecker) Irwin.  He was educated at St. Thomas University in Houston, and received his doctorate in literature at Rice University.  A naval lieutenant, he was a communications-watch officer stationed in Hawaii.

His first faculty appointment was in the English Department at Hopkins, from whence he became editor of The Georgia Review, returning to Johns Hopkins to chair The Writing Seminars.  He was longtime editor of the fiction and poetry series at Johns Hopkins University Press, as well as editor of The Hopkins Review, a literary review he revived.  Prof. Irwin was a recipient of Danforth and Guggenheim fellowships, and won the Christian Gauss Award from the Phi Beta Kappa Society for the best work of criticism of 1994.  In 2005, he was elected to the American Academy of Arts and Sciences.  He published many works of criticism on such varied American writers as William Faulkner, Edgar Allan Poe, Jorge Luis Borges, Wallace Stevens, Hart Crane, and Weldon Kees.  His poetry developed into full-length dramatic verse with characters who return to play decisive and very theatrical roles.

He leaves his wife of 27 years, Meme Amosso Irwin, his step-sons, Francesco and Stefano Saccone, and two grandchildren, Sophia and Matthew Saccone.  His brother, the Rev. William Irwin, a Basilian priest, teaches at the University of Toronto.