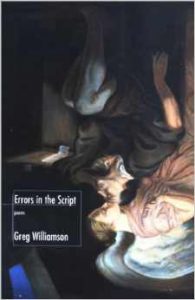 Greg Williamson’s verbal wizardry is again on display in these funny and darkly serious poems. As Richard Wilbur said of his first collection, The Silent Partner, Williamson “is concerned with the fugitive nature of all orderings.” And here, in the latest title in the Sewanee Writers’ Series, the doubling and hidden dangers in life and language ricochet wildly, as in the quadruple look at people’s relationship to nature and metaphor in “The Dark Days” or in the group of twenty-six “Double Exposures” where each poem has to be read three times.

These obsessive themes lead to a final section about the difficulties of any artistic quest in these disordered times. We hear from a sesquipedalian security mirror and a disapproving muse, join in progress a medieval romance in a shopping mall, despair with Wile E. Coyote, and see the poet’s frustrated efforts at a life in art in the title poem, a meditation on modern times,  filled with computer glitches, phone trees, and talk radio.