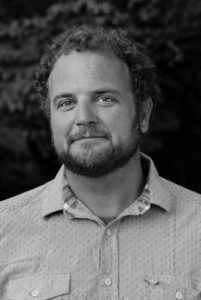 Though at times whimsical and witty, the poems in Hastings Hensel’s Ballyhoo inhabit the world beyond and between the punchline. In tightly controlled meditations on language’s limits and its necessity, as well as on the many forms that humor takes—comedy, laughter, farce, clowning, parody, and more—Hensel navigates fine lines between joy and sadness, jokes and cruelty, reality and illusion, and irony and sincerity.

Universal in scope, the 47 poems in Ballyhoo are richly idiomatic and evocative. They are also frequently grounded in the southern Atlantic coast with its particular ecology, characters, history, and myth. The pleasure in reading these poems comes from the original connections Hensel makes between the literary and the gritty: an elegy set in a bait shop, Twelfth Night‘s Feste delivering a monologue in a bar, a villanelle about a murder on a cruise ship.

Hastings Hensel is from Columbia, South Carolina. He graduated from Sewanee: The University of the South before earning his M.F.A. from Johns Hopkins University in Baltimore, Maryland. He teaches writing and serves as the Coordinator of Creative Writing at Coastal Carolina University, and he lives with his wife, Lee, in Murrells Inlet, South Carolina.