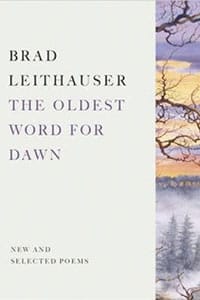 From one of our most universally admired poets: a generous selection from his five acclaimed books of poetry, and an outstanding group of new poems.

From the outset, Brad Leithauser has displayed a venturesome taste for quirky patterns, innovative designs sprung loose from traditional forms. In The Oldest Word for Dawn, we encounter a sonnet in one-syllable lines (“Post-Coitum Tristesse”), a clanging rhyme-mad tribute to the music of Tin Pan Alley (“A Good List”), intricate buried rhyme schemes (“In Minako Wada’s House”), autobiography spun through parodies of Frost and Keats and Omar Khayyám (“Two Summer Jobs”).

In a new poem, “Earlier,” the poet investigates a kind of paradox: What is the oldest word for dawn in any language? The pursuit ultimately descends into the roots of speech, the genesis of art. “Earlier” is part of a sequence devoted to prehistoric themes: the cave paintings of Altamira, the disappearance of the Neanderthals, the poet’s journey with his teenage daughter to excavate a triceratops skeleton in Montana…

The author of six novels as well, Leithauser not surprisingly brings to his verse a flair for compelling narrative: a fateful romantic encounter on a streetcar (“1944: Purple Heart”); the mesmerizing arrival of television in a quiet Detroit neighborhood (“Not Lunar Exactly”); two boys heedlessly, joyfully bidding permanent farewell to a beloved sister (“Emigrant’s Story”).

The Oldest Word for Dawn reveals Brad Leithauser as a poet of surpassing tenderness and exactitude, a poet whose work, at sixty, fulfills the promise noted by James Merrill on the publication of his first book: “The observations glisten, the feelings ring true. These poems by a young, unostentatious craftsman are made to something very like perfection. No one should overlook them.”