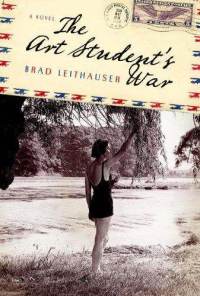 In The Art Student’s War, his sixth novel, Brad Leithauser has brought off a double feat of imagination: a keen and affectionate rendering of an artist as a young woman and a loving historical portrait of a now-vanished Detroit in its heyday.

The story opens on a sunny spring day as a pretty woman, in a crowded wartime city, climbs aboard a streetcar. She is heading home, where another war—a domestic war—is about to erupt.

The year is 1943. Our heroine, Bianca Paradiso, is eighteen and an art student. She goes by Bea with friends and family, but she is Bianca in that world of private ambition where she dreams of creating canvases deserving of space on a museum’s walls. She is determined to observe everything, and there is much to see in a thriving, sleepless city where automobile production has been halted in favor of fighter planes and tanks, and where wounded soldiers have begun to appear with disturbing frequency.

The glorious pursuit of art and the harrowing pursuit of military victory eventually merge when Bea is asked to draw portraits of wounded young soldiers in a local hospital. Suddenly, bewilderingly, she must deal with lives maimed at their outset, and with headlong romantic yearnings that demand more of her than she feels prepared to give. And she must do so at a time when dangerous revelations—emotional detonations—are occurring in her own family.

Rich, humorous, and grippingly written, The Art Student’s War is Leithauser’s finest novel to date—a view both global and intimate in its portrayal of one family caught up in the personal and national drama of the Second World War.