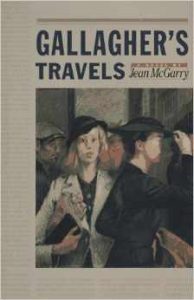 WAMPANOAG, R.I.—It’s the early 1970s and the golden age of the newspaper is drawing to a close. At big city dailies, computers have replaced manual typewriters and linotype machines. Calls from the managing editor to “Remake page one!” or “Stop the presses!” are now distant echoes. But in small-town New England, the Wampanoag Times still puts out newspapers the old-fashioned way. For Catherine Gallagher, an ambitious and eager college graduate, it’s the perfect place to begin a career as a reporter. Her first stories, however, are not exactly the stuff of Pulitzer prizes. Instead of the city beat, she’s assigned to the Woman’s Page, where she covers weddings and anniversaries. Then she starts writing stories that get her noticed, and when she’s offered a chance to work at a big-city newspaper, she shrugs off her fear and leaps at the chance. Once there, she finds that there’s a price for success.

Jean McGarry’s latest novel, Gallagher’s Travels, is a fast-paced, vivid tale set against a backdrop of late-breaking stories and colorful newsroom characters. With knowing insight, McGarry charts the emotional and vocational development of a woman determined to succeed in a profession rife with condescension and sexism. McGarry perfectly captures the rhythms of newspaper life and in Catherine Gallagher has created a character—inspired in part by the newshounds of The Front Page and His Girl Friday—both thoroughly authentic and wholly engaging.